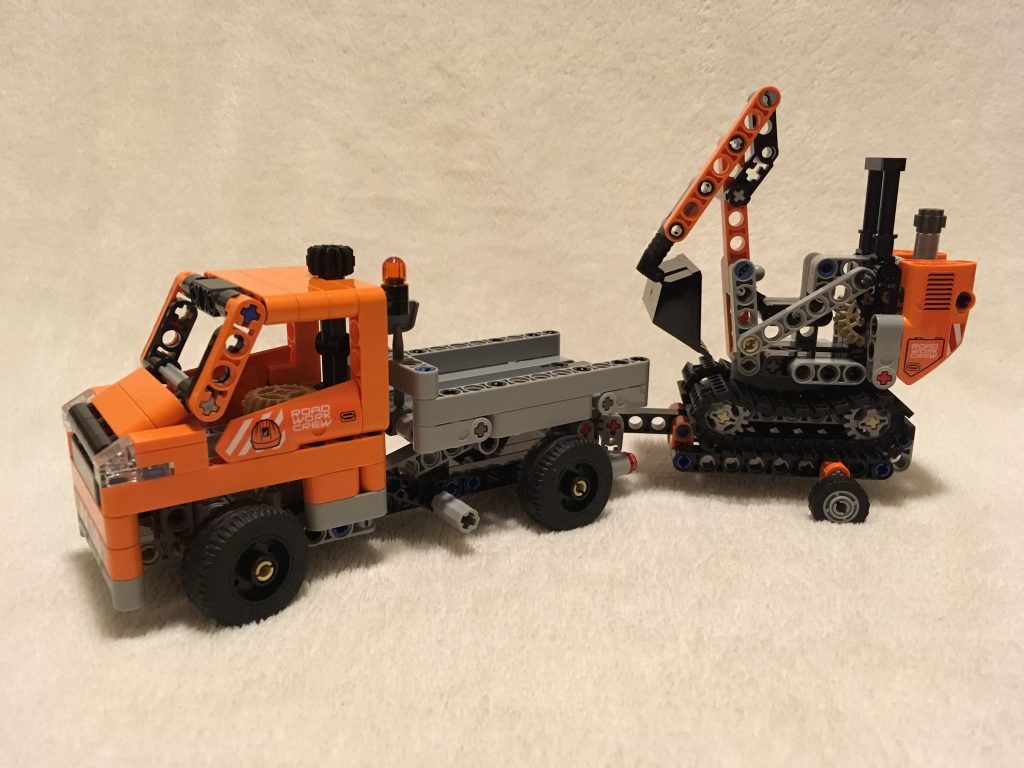 The build is perfectly suitable for Technic beginners. The excavator is slightly more complex than the truck, but certainly no challenge.

I tried building with the Lego Technic Building Instructions app for the first time, but switched back to the printed manual at “half-time”. The app is certainly offering interesting features (like animation for connecting parts and 3D rotation), but the overall experience is still not as good as the offline instructions.

The truck is simple yet includes two features: hand of god steering and a raising load area. I personally like the look, but the Technic purist might be offended by the system parts used to build the headlights. Although the mechanism to raise the loading area is very simple it sometimes got stuck for me.

The trailer is super simple, but will hold the excavator in place nicely. It includes the 40th anniversary beam only visible from the underside. The mechanism to attach the trailer to the truck is well built, but due to the small space between loading area and tow hitch a bit tricky to apply. Just like in real life its difficult to reverse and steer the truck while the trailer is attached.

The excavator is a great little build: It uses a worm-gear to raise and lower the boom and a simple yet effective mechanism to operate the dipper. The bucket is attached via a friction join and is able to tilt as well. The house is only connected to the undercarriage via one pin and can therefore rotate freely. In case this sounded like gibberish, you might want to read the Wikipedia article on excavators (like I did).

I was expecting Roadwork Crew to be a fun play set and it didn’t disappoint. It is packed full with action features and as a result offers great play value.