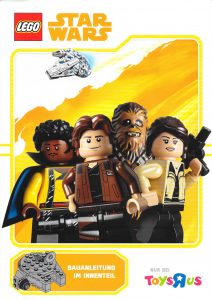 Like every year we see several Star Wars themed events for “May the 4th”. One of those promotions is a ToysRUs event with different challenges for a chance to win some Star Wars toys.

ToysRUs events usually feature a building event where you can build (and later take home with you) a small Lego modell. For this years event a Millennium Falcon was announced and I was curious to see if it would be the one featured in the new Solo movie.

There have been several renditions of the Millennium Falcon from the original Star Wars series. Most of them have actually done a better job in capturing the aesthetics of the freighter. However its a sturdy build and I do like how it looks from the back.

This particular version seems to be identical to TRUFALCON Millennium Falcon from 2016. Its probably fair to say that ToysRUs has simple re-used the old design and adapted the instructions to feature the upcoming Solo movie. While this might be disappointing for collectors I believe that kids as the target audience won’t mind.

Our local ToysRUs store provided a lot of space for the event with tables to build, free promotional material and two very nice promoters, that would help kids (and their parents) with the challenges. Most of the other visitors didn’t know about the event and where therefore pleasantly surprised. While the kids where busy building Lego their parents had time to shop. A really nice and well organised event!